What kind of rig is this?

#1
When I was seven years old, I got a couple toy vehicles like this in my Easter basket except they were brightly-colored and had only three axles. The old lady who visited my grandparents' house for Easter Sunday with my family called these "swamp buggies" but many years later I had discovered that "swamp buggies" were those boat things with an airplane propeller that had a flat bottom. Can a vehicle like this ford water well? Does it have special advantages over an ATV, Jeep or a side-by-side? 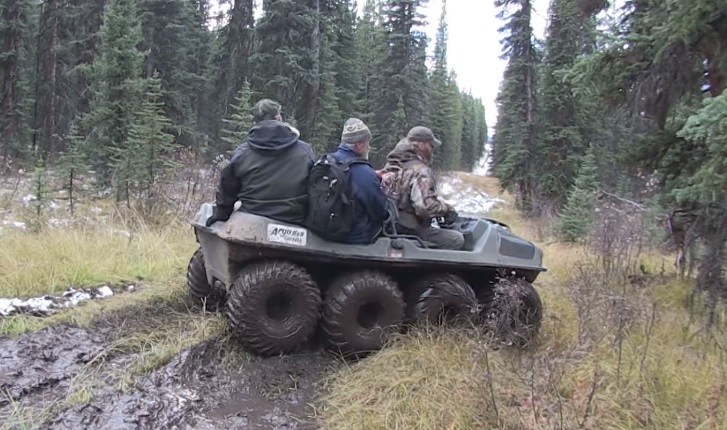 Forum Supporter
2019 Supporter
2021 Supporter
#2
I remember those from the early 80s I think it was. I can't remember who made them.

Nowadays I want a Sherp.

#5
Janizary said:
Click to expand...
The tracked versions seem even more capable than the ones with wheels.

Adjusting to the west!

Adjusting to the west!

Forum Supporter
2020 Supporter
#7
Oh yeah the tire and tread models are the same. The treads go over the tires.

Work great for running over the spongy marsh grass. And not bad for swimming if the seals are tight. Not very fast in water without ground contact or extra outboard motor.

#8
Pandanin said:
I remember those from the early 80s I think it was. I can't remember who made them.

Nowadays I want a Sherp.

Click to expand...
Sherps retail for about $119K a copy starting. About the combined price of a new Toyota Tundra TRD Pro Double Cab, a new bass boat and a new travel trailer. There was a girl in my high school named "Sherpa", first name. She was white. One-of-a-kind name. I thought it was kind of cute. An Italian boy sitting next to her in American history had a crush on her and always called her name cute-like in tone of voice, very affectionately.

If you are rich though, Happy Sherpin' to you! I've heard of people who have gone Jeepin' before, but never Sherpin'.
I don't care to be an Argoer either. I've always though it might be fun to go deer huntin' on horseback though.
Hunting in Hummers and on ATV's is not my bag, I'm not game for it, no pun intended.
Last edited: Feb 11, 2020

#9
Throw a recoiless on top, for bad guys

I aim to misbehave...

Staff member
Moderator
Forum Supporter
2019 Supporter
2020 Supporter
#10
Dammit, nostalgia kicking in. When I was a kid in the 90’s, there was a tv show that had kids racing off road machines including the “Argo” as shown above. I can’t remember the name of it for the life of me.

Forum Supporter
2019 Supporter
2020 Supporter
#11
jfrey123 said:
....there was a tv show that had kids racing off road machines including the “Argo” as shown above. .
Click to expand...
Banana Splits had ones like them, but thats from quite a bit earlier

Staff member
Moderator
Forum Supporter
2019 Supporter
2020 Supporter
2021 Supporter
#12
Lived near a swamp some years back , a swamp buggy is a vehicle with large tires and a huge, lifted ground clearance, sometimes as much as 10-20 FEET, and usually powered by a highly modified (lots of horse power, 8-71 and even 12-71 blowers are common) V8 or Diesel.

On the other hand, an air boat is the flat bottomed boat with the caged propeller in the back as it's propulsion.

Swamp Buggies can run on dry land, in the swamps with the tires and most of the suspension lift fully submerged, climb over sunken tree stumps, etc.

Air boats can run over water, and over wet, slick marsh grass, but come to a grinding halt on dry land, saw that happen to more than one drunken driver in the past!

One idiot we knew tried to jump a levee road with his air boat, he apparently didn't know, or in his drunken state had forgotten, that since the last time he had done it showing off, the state had widened that levee road from one lane wide to 4 lanes wide.

Up the slope out of the water he went, but instead of crashing down safely into the water on the other side of the once narrow levee, he landed on asphalt, slid, ground the bottom of the boat dang near through.

Rest of us parked alongside the bank, climbed it to see the wreck.

A minute or two later, along comes a semi and flattened the airboat. $50k of boat and motor gone in an instant of drunken stupidity, and yes folks, it was preceded by "Hey ya'all, watch this!" as he was trying to impress some of the single young ladies riding in the other air boats, impress them enough to get them to ride with him.
He had lots of money, no brains, and looked like Jabba the Hut in a speedo, but the booze gave him the courage of a lion when it came to pursuing the ladies.

I though I was going to have to give my poor wife mouth to mouth resuscitation, she laughed so hard she nearly passed out from the lack of oxygen, and the single gals, who were some of her model girlfriends, were laughing just as hard.

Poor old Jimmy John McRae never had a chance with those gals, but you had to admire his never give up attitude.